I visited the 31st London Business Show on May 15th, 2014 at Excel, London and have enjoyed it very much. I went with an intention to only find out more about the various companies showcasing their brands but also to document interesting branding and booth displays. Although the whole event was great with various seminars and talks, I must admit the branding side of things was a little of a let down.

It proved to me, yet again, that London lacks the kind of brand zeal that I find in New York or the States in general. I always held the contention that companies in the UK do not care as much about branding as they should and it is not top of mind. Companies often spend quite little on their branding strategies and visual language implementations.

I saw the same at the London Business Show. Most of the booths were very unattractive and it was hard to differentiate them from the others. I have posted pictures of some of the better ones below with some of my comments. The best booth/area was that of SalesForce. I loved their open space layout and the beautiful colors and background. Although I liked the huge iphone on the wall, I was not sure how it related to their business in the first place. I thought it was an Apple booth at first! SalesForce is the world’s largest provider of CRM software and they were promoting their new Salesforce1 platform to transform how companies sell, service and market for the internet of customers. This booth and brand strategy by Oakley Global Solutions was clever and different. As I walked by, Ashley Miller, an ERP business development manager at Oakley, dressed as a doctor approached me and asked “Are your accounts giving you a headache?” In her hand was what appeared to be a box of pills! Brilliant! It made me laugh and take notice. It differentiated itself from the other booths and made me care to know what their message was. Oakley improves the performance and efficiency of companies and are a leading supplier of Sage Mid-Market solutions. Although this was not a booth, I chose to include it because of all the talks that I attended, this one had the best visuals on the screen including their logo design. It was by Brian Lavery from Twitter. Although I found the content a little basic (for me), Brian was awesome and funny! An open area both by Sixt Rent A Car with nice little orange Mini and some cool branding. Sixt always has a good sense of branding and I see their feet of cars and vans with some professional messaging hurrying along the streets of London. Sixt SE is an internationally award winning provider of premium mobility solutions for business and corporate customers. This booth by Clothes2Order (C2O) was simple. I would have expected more from them since they are essentially promoting design – uniforms, events and promotions and yet their own booth was too simple for my taste. I would have expected a rack of suits or uniforms that they had designed in the past. Alternatively they could have designed some special uniforms just for this event and put them on display. C2O helps with clothing printed the company logo and slogan. This speed networking event booth area was sponsored by JustCashFlow. Again you will notice the very barebones branding and design. I think speed networking is great for young entrepreneurs to help them hone their ability to give out an elevator pitch in 30 seconds about their business. I don’t really find the value in exchanging business cards though. So this booth represents the company that is the official graphics supplier to the London Business Show. I had a tough time recognizing that the company is actually called KDisplay and the icon in their logo stands for K. In fact I had to scour the event magazine for the listings of all the booths to identify this company. They have done a good job with the actual booth stands panels and posters printing. This was a surprising brand – JWell Belgique – a French electronic cigarette distributor and also the manufacturer of aromas and e-liquids.I must admit this booth was one of the better branded ones and the result was a lot of interest and activity around it. Angels Den did a fabulous job with their  branding. Of course they had a massive open air booth that covered the space of over 10 or more smaller booths. The huge logo on the back was clean and to the point. Lack of clutter and unnecessary design elements meant that it was not a pain focusing on the panel and the presenters. This booth was particularly interesting because I specialize in working with luxury brand and in the luxury space. Although the message of the branding was not clear right away and it was quite difficult to ascertain what this company was because of the lack of prominent and clear branding, I think at least they got the basics right by using some props. I met Brad Burton, the man himself. Brad is called the “Tony Robbins of UK” and is an awesome motivational speaker and the founder of 4Networking. Brad’s talk was a sell out with people hanging out of all end of the key hall. He motivated everyone and I became a fan! A wonderful branding and story telling by Penelope, a virtual phone system company. On this huge wall, they gave visitors the opportunity to post their service and for others that required that service to pin a response and vice versa. This generated a lot of activity around this booth and created a lot of brand recall. While most of the other companies were engaged in direct sales activities – stopping everyone passing by their booths and asking them if there were interested in buying their service/product – Penelope actually did not talk about their service at all. 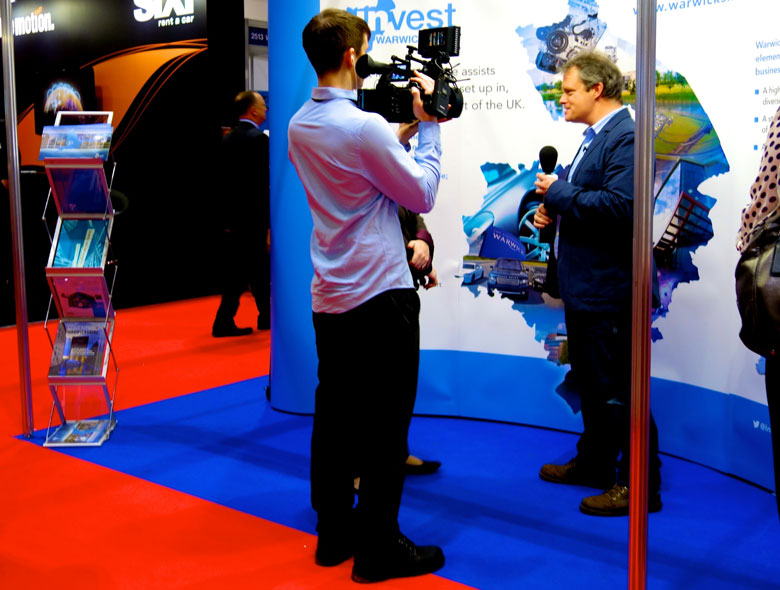