Cartoon characters in a company’s logo design is not recommended for everyone. Great though should be put into the brand strategy to ensure the mascot character driven logo would have sufficient supporting brand elements and breathing space to be truly effective. In this post, we will analyze one such project where the client wanted a cartoon character integrated into their logo design.

Kapow Gym wanted to beat the trend and have an identity that was totally different from the rest of the Gyms in their area. To achieve this, the client wanted to incorporate a cartoon character of a kangaroo in a boxing pose. The client wanted to use this character (called Kapow) in all their branding and in creating a rapport with their clients as well as target audience.

Kapow had to be strong and tough but in a sexy playful way with funky gym clothes and boxing gloves. Down the client also had plans to turn this character into a kangaroo costume and stuffed kangaroo toys. So, we had to create a character that would work well both on digital media and in a physical format. You can also read how a mascot design is created.

The first phase of any cartoon character logo design starts with brainstorming sessions, doodling and pencil sketches of the characters. Our talented cartoon artists came up with two different directions and two pencil sketches – one with an attitude (wearing shades and with a leaner body) and one with a more friendly and innocent outlook. 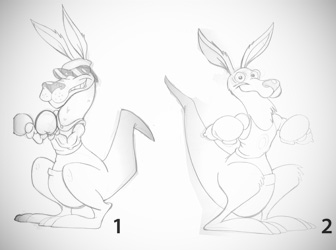 Armed with the feedback from the client, our cartoon illustrator went back to the drawing board and started sketching again. With cartoon illustrations, since they are done in pencil first, each revision round means fresh sketching from scratch. We came up with the sketch below. The client came back and said that even though the smile and teeth made the character look better, the character still looked “goofy”. He/she needed to look more adult/grown up. It didn’t look very intelligent and needed to look smart, sleek, and have some sex appeal. Imagine someone with lots of personality, charisma, sex appeal, and crazy/fun attitude.

Our character artist hit the board again and decided to show a little more teeth, tighten up the eyes and perhaps make the ears a little straighter to bring in the intelligent look. The following sketch was shown to the client. I like that you’ve added a bit of character to the gloves – they look more old school which is cool. The face is still off though. Part of the problem for me is he doesn’t look genuinely happy – which I’m sure sounds weird. He’s got a gritted smile. Can you make it a more open mouth smile and maybe more face on? It needs to look like we are capturing him mid-laugh about something hysterical. Right now it looks like the fake smile people use to pose for pictures.

This time, since the overall cartoon character has been approved by the client, the artist moved into inking and digitizing phase. Inking involves outlining the pencil sketch with a blue or black ink pen. Our artists usually use row-quill pens, head sizes: 513 bowls pointed and 104. After inking the image is then scanned and imported into Adobe Illustrator. After that, it is simply a matter of patiently drawing Illustrator paths on top of the inked outlines. This is an iterative process and depending on your Illustrator skills can take anywhere from an hour to a few hours.

At this stage, since the illustration is in digital format, it is easier to show various options. Our cartoonist had come up with a few variations of the character’s mouth and smile.

Nice choices, thanks for that. I definitely like number 3 the best with number 4 coming in second. Can you put that same mouth expression next to the original sketch choice where the features are more rounded? Also, can I see what number 4’s eyelids look like on number 3? I’m much happier with these options.

We presented the client with this version and the client approved it almost straight away. We then moved on to creating the logo based around the cartoon character and went through the various coloring phases to arrive at the final design.